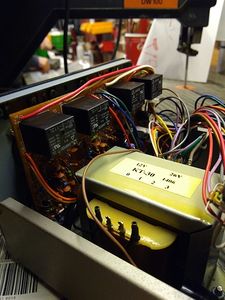 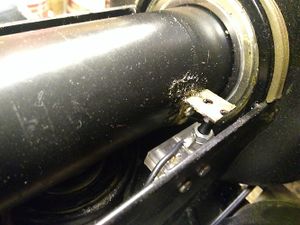 The default rotator controller is Rot2Prog, the motor driver consists of relays. The interface with the client is done with [Hamlib](https://hamlib.github.io/) via a USB. A note here: The cable is USB-A male to USB-A male, which is weird. Two rectifier bridges are used for protection of the board from the currents of the DC motors. The cost of Rot2Prog is ~250$.

But how are the relays worked?

All of these rotators seem to be based on the same first stage worm gear box as the RAS. The second stage looks like this and changed according to the maximum output load (and maximum break torque). From all the datasheets, it seems that the motor needs 12-18V@3-20A or 20-24V@3-20A (max current depends on load or rotator controller, e.g. PWM control). All of these rotators use the same controllers as RAS/BIG-RAS. The motors are DC (it seems that they are the same as RAS/BIG-RAS). For position sensor, a reed switch for the standard version and a hall effect sensor for high resolution version are used. From the number of cables and from the type of controller it seems that there are no end-stops connected to the rotator controller. This post confirms that the SPX-01 and SPX-02 have no end stop switches on either azimuth or elevation. Also the limits are set in the controller, based on the user's cabling setup. In this system, the brake system is the double worm gear. In the specification, the rotation range is AZ/EL:360/180deg - the same as the RAS. The available rotator controllers are the same as the SPID rotators.