From SatNOGS Wiki
Revision as of 13:25, 30 April 2020 by Matburnham (talk | contribs) (Created page with "I'm not entirely sure where to put this, but perhaps someone more experienced can move and link this from a sensible location. This started as a question continuing the [https...")
(diff) ← Older revision | Latest revision (diff) | Newer revision → (diff)
Jump to:navigation, search

See elsewhere, but get GNU Radio up and running and a copy of satnogs-flowgraphs from GitLab.

I'm using a virtual Ubuntu 19.10 machine grabbed from osboxes.org, but you can use whatever you like. I imagine you could even do it on the Raspberry Pi itself. I did end up setting this VM up as a 'development station' but you should only need to install GNU Radio, and any pre-requisites needed by satnogs-flowgraphs - so probably gr-satnogs, I can't quite remember. As you find out please edit this :-) 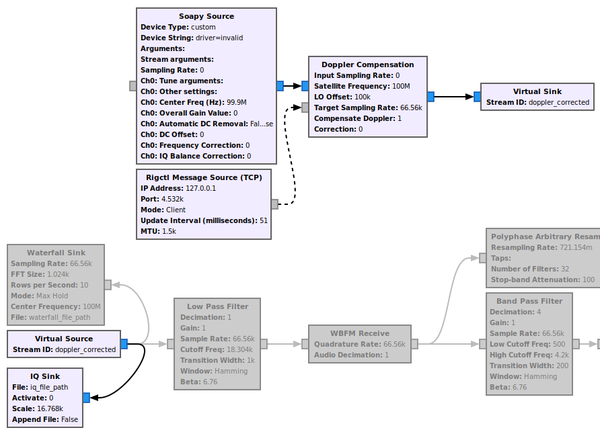 That is, it's post Doppler correction, which includes an LO offset; and the values are scaled to shorts, although 16768 seems an weird number as I'd have expected a power of two - 16384? I don't imagine it makes a lot of difference as it'll still fit in the short just lose a little bit of dynamic range.

Loading the flowgraph in requires some GNU Radio modules chaining together. Starting with How to open satnogs iq.dat files you'll end up with something like this:

It took some time for me to work out the appropriate samples rates but I can't remember exactly how now. Scheduling a pass will generate them and then you can work it from there. Maybe I'll come back and update this later.

The rest just reverses throttles the output to real-time, and converts the short values to complex real including the scaling division. 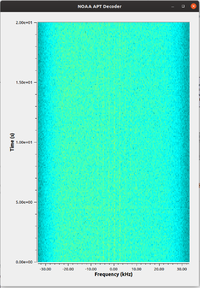 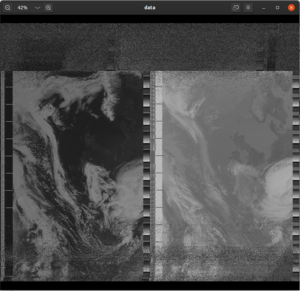